AN INTERVIEW WITH ANIMATOR TIM ALLEN 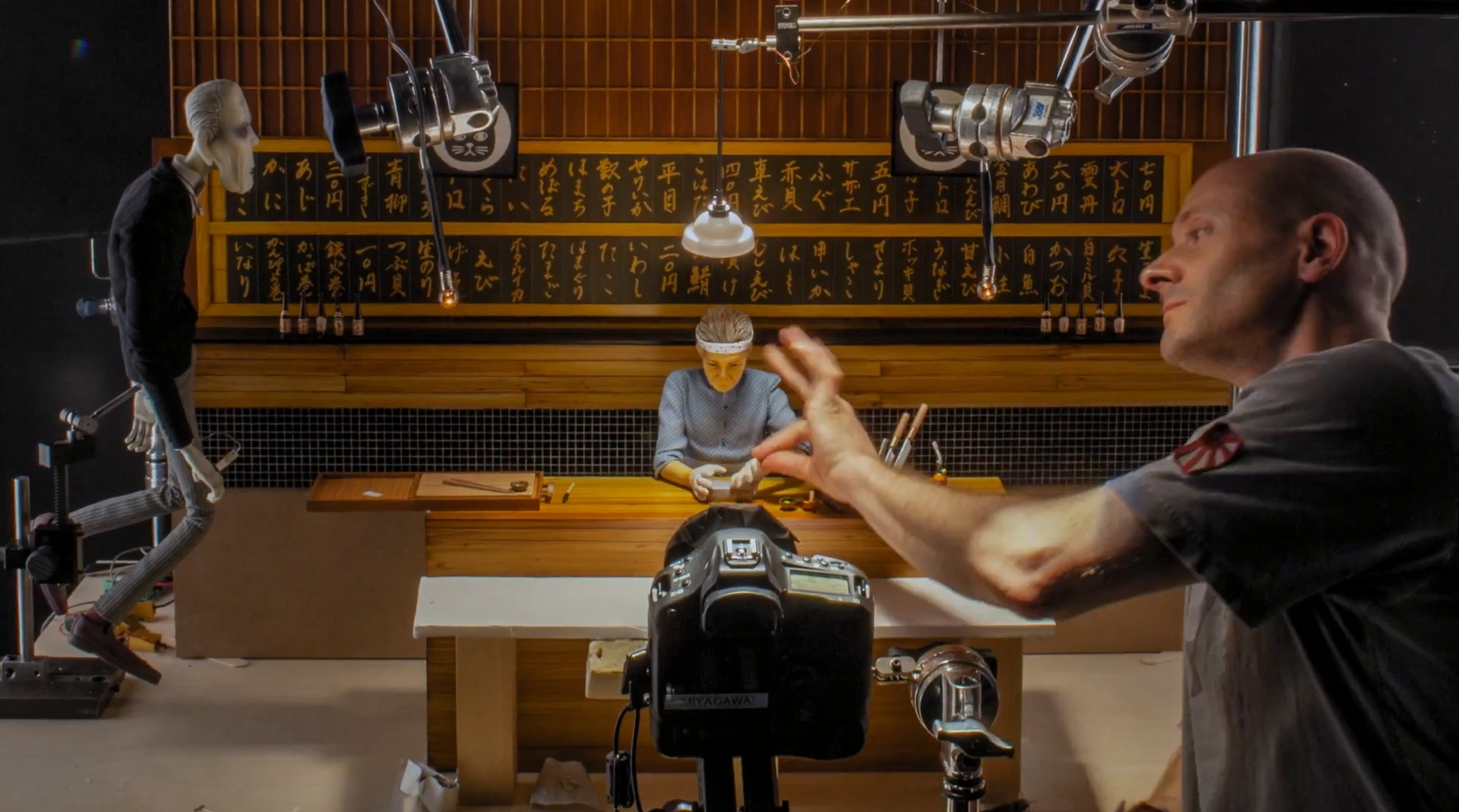 On 8 March London Film School had the privilege of welcoming animator Tim Allen for a breakfast masterclass in association with Film London. With the room full of fans, budding animators and excited staff members wanting to learn more about the world of stop-motion, Tim screened and discussed an array of animated clips from various points in his career, ranging from his earliest work as a student of animation to his recent work on blockbuster hits. Explaining the different briefs and specifics of each project as he went, Tim treated us to his first ever show reel, containing his work on 'Postman Pat' and 'Bob the Builder', before discussing his work on Tim Burton’s 'Corpse Bride', Academy Award-winning 'Peter & the Wolf', 'Magic Piano', 'My Life as a Courgette', and Wes Anderson’s 'Fantastic Mr. Fox'.

For anyone in the room not already buzzing with excitement for his latest project, Tim was sporting his rather smart 'Isle of Dogs' crew t-shirt. He confessed before the talk that he did wonder whether it was too much, but also felt it was a pretty cool uniform for an animator. He’s collected the crew t-shirts from numerous big animation productions he’s worked on and wears them with pride. Who can blame him?

After screening and discussing nearly an extra hour’s worth of clips for his transfixed audience, Tim held a Q&A and chatted with the crowd of keen animators that gathered after the talk. I caught up with him a couple of weeks later to discuss all things stop-motion. 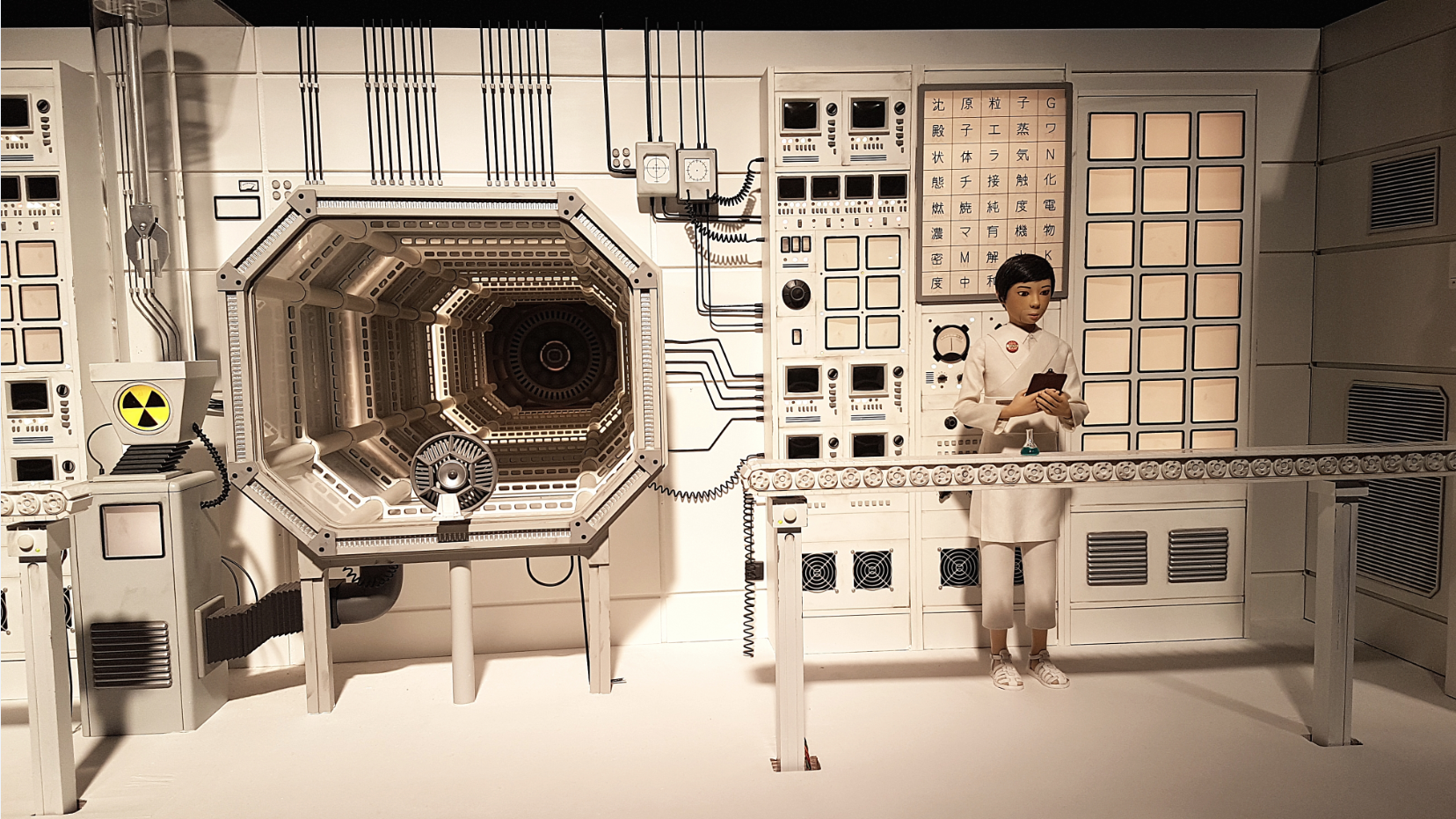 “So, how many dogs are there?”, I ask, referring to the nearly 17 months that Tim spent on Wes Anderson’s latest stop-motion film 'Isle of Dogs'.

“In the main pack there’s 5”, he explains, “but then there’s all sorts of other dog characters that come along. Be it background characters, be it the cannibal dogs… there’s loads”.

“Almost like there’s a whole isle of dogs?”, I suggest.

“Almost like there’s an isle of dogs. They should make a movie about that”, he laughs. Tim also points out that the title sounds a lot like ‘I Love Dogs’. Had anyone else noticed this? I hadn’t.

I asked about the number of dogs in the film as I was learning that CG can help pad out crowd scenes in animation and, in the case of Wes Anderson’s new film, add dogs ad infinitum. Tim had brought up the topic of CG at his breakfast masterclass when discussing the use of the term ‘3D animation’. He said that from the mid-nineties, his job could no longer be referred to as ‘3D animation’ and became known as ‘stop-motion’. I asked what the difference was. “You will always see a merger between CG (or 3D animation) and stop-motion”, he explained. “It might be that we shoot things on different layers and then they’re combined as different layers in post-production. Sometimes you’ll have background characters if there are lots of crowds and the crowd characters will be done in CG… or they’ll even 3D scan puppets on each frame”.

“'Isle of Dogs' used a lot of CG post-production, even though it’s got a very stop motion look with cotton wool smoke and cling film water, but it was more because Wes (Anderson) wanted lots of different layers of effects, characters and backgrounds that he could tweak and move about later on”. 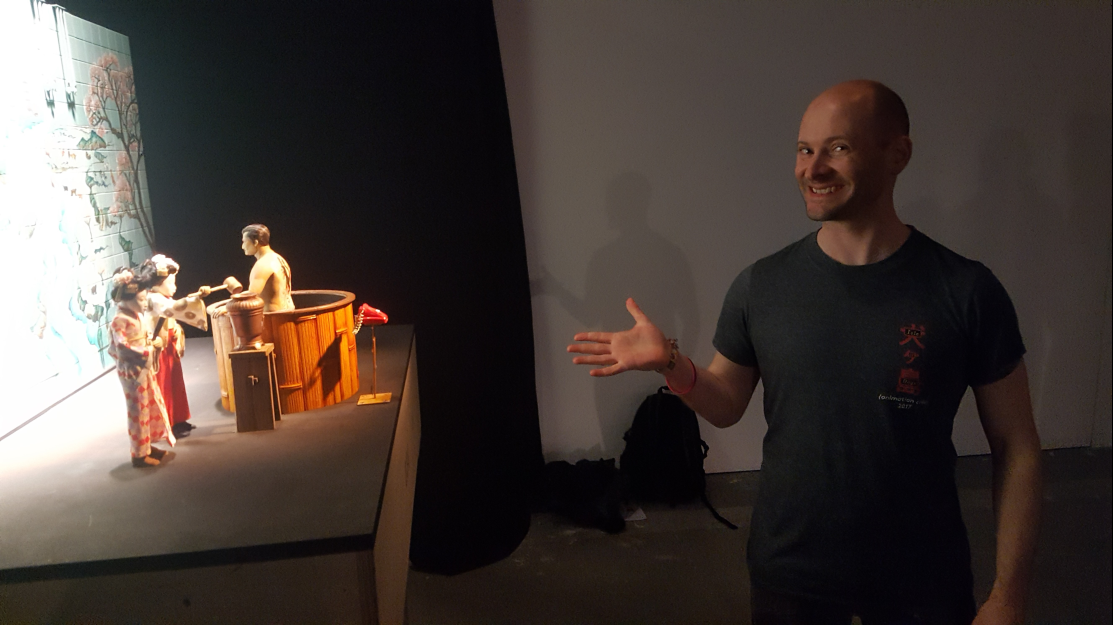 Tim hadn’t always wanted to work in animation, but looking back at his formative years it is clear that drawing and creating has always been a big part of his life. “Most of my childhood and my teenage years I didn’t know what I wanted to do. What I did know, though, was that as a kid I was always drawing cartoons and characters… I was creating characters and I couldn’t stop myself from doing it. I loved drawing so much”.

So how did he come across stop-motion? “I went to Bournemouth University to go and see their model making course. While I was waiting someone said, “anyone here to see the animation course?” Immediately I thought, “that sounds cool”. I had a look. They didn’t do stop-motion, just drawn, but instantly I thought “this is it”. I found a university that did do stop-motion. It was Glamorgan University, which is now called the University of South Wales, and I went to the interview with the biggest, heaviest portfolio full of work because I had been so determined. From the age of 18, I was absolutely dead set: this is what I want to do”.

I decide there’s no better time or person to ask the basic questions. “Explain it to me like I’m five”, I said, “how do you capture animation? Do you use filmmaking equipment that would be used to shoot live action?”

“We don’t use more traditional film cameras because we’re capturing individual frames”, explains Tim, “so, in stop-motion, we use SLR digital cameras because they’re capturing very high-resolution images. This sends a live video feed to the computer, so at a lower resolution I can see preview images of the frames I’ve captured before. I can compare those previous images to the live image of what I’m about to capture so I’m able to keep a consistency of movement”.

What about the sound? Where does speech slot into the process of capturing animation? “The actor’s voice is always pre-recorded so I’m working to that, not just to get the specific words of the lip sync but also to get their emotion; their performance”. I ask if it’s an animator’s nightmare for a character to have a lengthy monologue. “I’m not so bothered about lip sync”, says Tim. “There are different methods to how you create the mouth shapes, but about 90% of the performance comes from the eyes and the body language”.

“You can add a bit to lip sync by perhaps emphasising the accent or giving a bit more of a sneer”, he suggests, “or if your character is angry by showing a bit more teeth, but on the whole you’re bound by certain rules that you have to form certain shapes to make certain sounds”.

The director-actor relationship is, unsurprisingly, very different when it comes to animation. The performers are the animators, who often work under an animation supervisor who is a stop-motion translator of sorts, converting the director’s vision into a language that the animators can all understand and transfer into the frame. “You’ve all got to learn to do it as if it were done by one hand”, Tim says of the difficult task of having a group of animators work on the same character over time.

“With direction for animation it’s sort of similar (to directing live action) but over a longer timescale”, says Tim. “In the early stage of the production, there’s a testing development stage… to look at the style of movements. We all have different body language, and you need to find the mannerisms and walk for that character. You don’t get it straight away. The animator is working with the director to try and find it”. When Tim explains the importance of body language he becomes very physically expressive, as though he’s accustomed to first embodying the physicality of a character before he animates them to do the same.

“Once a film starts getting bigger in scale and more animators come on board, then those animators have to learn to copy the style of movement and body language that’s been approved for a certain character. If characters I’m animating have to interact with a character I’m not so familiar with, I then have to look at footage that other animators have developed to establish the character and copy the body language and mannerisms they’ve developed for them”. 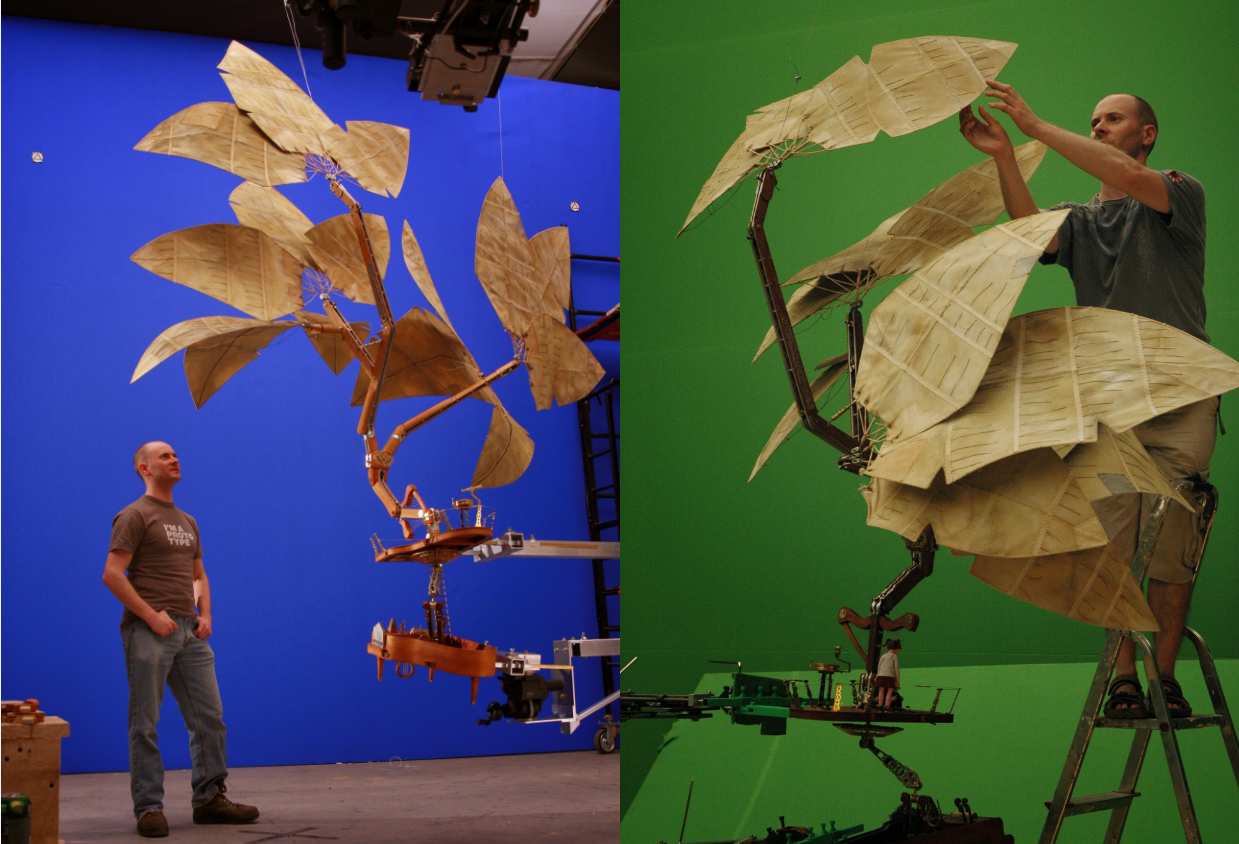 I ask Tim which film project he’s found the most challenging so far in his career. “Undeniably, 'Magic Piano'”, he responds instantaneously. “The puppet itself was called ‘the flying machine’ and it was a 2-metre high flying piano with wings… it was incredibly heavy and couldn’t hold its own weight so it needed other wires to help support the weight of the wings”. Tim seems to be revelling in something between a fond memory and a Vietnam flashback. He describes the various descriptions he was given as animation supervisor to bring to life this machine/spirit hybrid that is supposed to come across as “the living embodiment of the spirit of Chopin’s music”.

“It was described to me to move in a way that sometimes is like a breathing cloud… sometimes a galloping horse charging through the air or, if it’s quite passively and slowly gliding, a bit more like stroking a cat. That kind of feeling”. We all know it well. “I have to find a way to transfer those descriptions into the movement of the character”.

Itching to bring the conversation back around to 'Isle of Dogs', I ask how long a film of this scale takes to animate. He explains that at its busiest, the film had around 25 animators and 40 sets “The whole process was close to 2 years, which is quite long for a feature film. Our working days were 8am-7pm; I was maybe getting 3 and a half to 4 seconds per day in a 10-hour day and I was doing mostly the human characters which are a bit faster because they don’t have all the fur to animate. So the animators who were doing 5 dogs talking with all the fur blowing around, they might get somewhere between 2-3 seconds a day”. I ask if he is a patient person, to which he laughs and says, “it’s funny because everyone assumes you must be patient, but we’re just there trying to get the performance right and give the director what they need on any given production… we don’t see it as patient, but I appreciate it can be fiddly and detailed”. 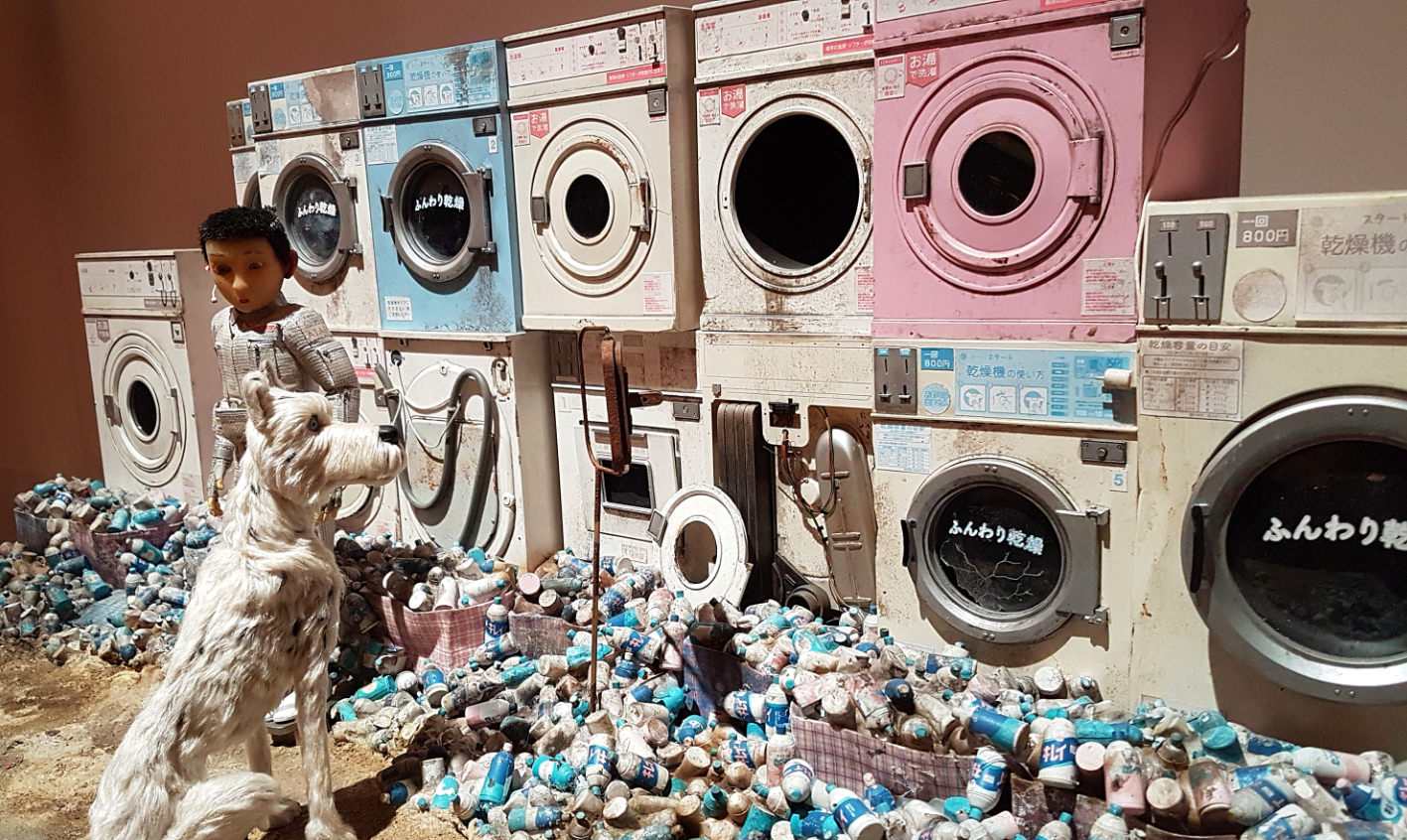 Patience seems to be key to getting into the profession, however. When I ask Tim what advice he has for budding animators, he says, “It’s a slow start… I got rejected by every single animation company in the UK”. He stands by the importance of making contacts in the world of stop-motion, recommending that you try to get involved in animation in any capacity you can. “Work experience, running, whatever you can get is valuable. Don’t be afraid to ask people who work in animation their advice on what work you should show and who you should contact. It sounds clichéd and, of course, your craft won’t improve without practice, practice, practice, but in terms of getting hired it’s about creating as many opportunities for yourself as possible”.

“It’s not an easy industry to get into”, Tim admits, “but if you keep collecting rejections, they see you have perseverance and eventually someone will have something”. For Tim, it really has been something.

You can see Tim Allen’s latest project, 'Isle of Dogs', in cinemas from 30 March. Watch out for the three characters he primarily animated, Mayor Kobayashi, Major Domo and Atari.

Photographs are from the 'Isle of Dogs' Exhibition at The Store X, 180 Strand, open from 23 March to 5 April.

Want more Tim Allen? Don't miss him in ISLE Of DOGS I Making of: Animators