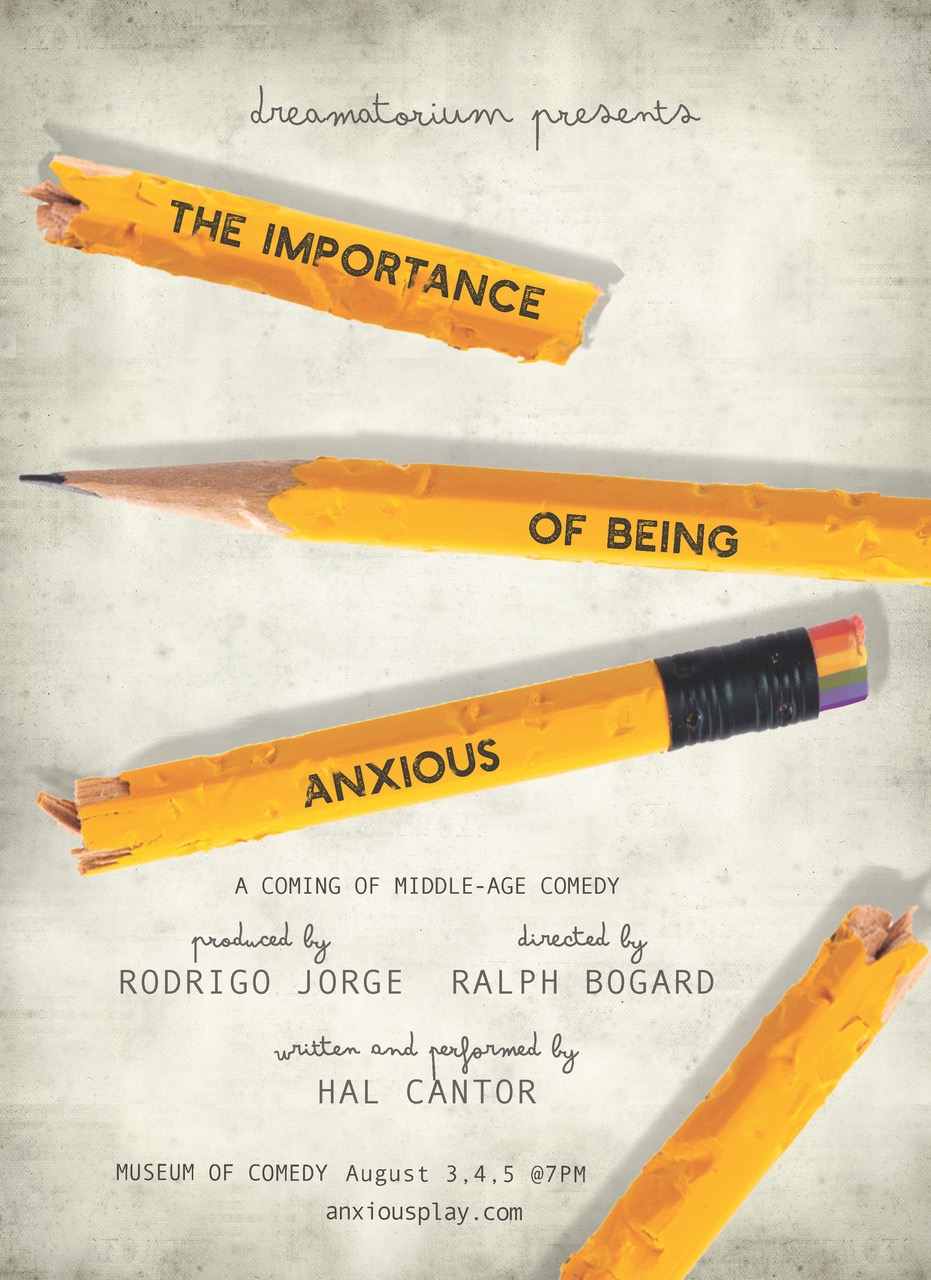 We were delighted to see that MA Screenwriting (MAS) graduate, Rod Jorge is producing a play to appear at the Museum of Comedy in August. It stars and was written by Hal Cantor, a MAS visiting lecturer and Rod’s mentor.

MAS students are paired with mentors to support in the development of their feature film screenplay. This relationship is established during Module 3 and often continues beyond graduation to support graduates into their careers and so it’s fantastic to see that this has resulted in such creative work.

We spoke with Rod and Hal to explore how their project came together and what they got from being paired together at LFS.

Tell us about the new play ‘The Importance of Being Anxious’

Rod Jorge (RJ): The play is a gripping self-exploratory piece where Hal dissects various facets of his life, from grief to his coming out later in life and how that connects with his Jewish upbringing. But, more importantly, it’s freaking hilarious.

Hal Cantor (HC) Importance has been gestating for nearly a decade. There comes a time in the life of a writer, where—events, emotions, mindset, timing — bring one to face the inescapable fact that a work is “ready.” It’s time; things seem to fall into place. One can tweak themselves into paralysis, or procrastinate, but at some point, a play needs to get on its feet. For The Importance of Being Anxious, that time is now.

The play is an exploration of grief, love, sexuality, religion, seen through the lens of a very anxious man (aka: me). Originally, the play was focused on my coming out in mid-life. It has evolved over the years, into something broader, but in many ways, more focused. It’s nothing less than an honest, often very funny, occasionally poignant (one hopes) look at life in mid-age. With lots of gay sex. (It is PRIDE month, after all!).

You were both teamed up as mentor and mentee during your time at LFS. How has working together been beneficial in launching the new play?

HC: I’ve had the great fortune of mentoring many wonderful, smart LFS MAS students the past 4 years. Rod Jorge is an extremely talented writer, who works across genre. I mentored Rod in the development of his TV pilot. Rod’s voice, its sharp satirical edge, resonated with me. Also, he’s a lovely guy. He asked to read a play of mine, as he has a theatre company, called Dreamatorium UK. They were looking to bring a show to fringe. My play was in its final stages, so the timing was right. I sent it his way. He responded to it. And here we are. It will premiere at the Camden Fringe Festival, 3rd, 4th, 5th of August at the Museum of Comedy. (Yes, shameless plug). And link: AnxiousPlay.com.

RJ: It was lovely having Hal as a mentor. He is funny and insightful and didn’t pull any punches (still doesn’t). It was a perfect match (I guess if it weren’t I wouldn’t be here talking to you, eh?). He helped me develop my TV pilot and during our feedback sessions we bonded over our love for theatre… and before I knew it, I was the one reading Hal’s scripts and giving him notes (kind of a fun role reversal). It was invaluable to have that one-on-one time with him so we could develop a relationship that would go beyond the classroom.

How has your career developed and what has led you to teaching at LFS?

HC: I fell in love with teaching after falling in love in life. It was in Berlin, where I had moved to be with my partner, an Englishman called Mathew, where I landed a gig for a London Film School that was opening a satellite campus in Berlin (It may also be in the genes as my father was a New York City secondary school teacher for over 30 years). This job in Berlin led to many others, across Europe and in the U.S. (I have taught television at The New York Film Academy for the past three years). Teaching is very much a passion, and I’ve discovered that it’s a two-way street: I am teaching, but also learning. All the time. It keeps me fresh.

What’s the most important thing you learned at LFS?

RJ: That we can’t do this — writing, filmmaking, etc — alone. Well… we can, but it’s not ideal — we need people around us whom we trust (i.e., who are talented and considerate and care about us) so they can not only sing our praise but call us on our bulls#1t and comfort us when things don’t go our way and we need to start over. Nurturing a support system is no small feat and I’m grateful to LFS for creating an environment where I was able to develop relationships which I’ll take with me for life.

What led you to study at LFS and what was your background before you ended up at London Film School?

RJ: I’m a director/producer at Dreamatorium UK but I’ve always been a writer at heart. The MA Screenwriting at LFS seemed like the right programme to give me structure to focus solely on writing, so I applied… and the rest is history.

We’re looking forward to seeing The Importance of Being Anxious in August. What’s next, do you have any more projects lined up?

HC: As I tell my students all the time, it’s always best to have multiple projects happening; to always be writing or thinking. In my case, I am currently writing on GREAT ESCAPES with MORGAN FREEMAN, a documentary show (which is really a bit more of an action-adventure narrative), that will be having its second season on THE HISTORY CHANNEL. I’m also working on an original comedy pilot, set in the world of theatre.

RJ: I wrote the script for a comic book series called Stateless, which luckily drew the interest of a renowned American comic book artist, Andrew Griffith (Transformers / G.I. Joe / Star Wars), who is drawing it as we speak. We are planning to release it in October.

What advice would you give to someone who’s been accepted to LFS, to help them make the most of their time here?

RJ: Don’t take yourself (or your work) too seriously. In the wise words of Jordan Peele: “If you’re not having fun, you’re doing it wrong.”

HC: I can speak more to writers, however, the same applies to filmmakers and actors, or anyone in the arts, and it’s simple: keep writing (making films, acting, auditioning). You have to have material. And experience. School is great for deadlines and getting things done, but one needs to always be working. When the agent asks, what else do you have? You must have projects/ideas/pitches-in-waiting. I think there’s this notion that if your project gets into Sundance, that your career is about to take-off. You can’t bank on that. It’s an absurdly competitive industry. You have to want it, and often to the exclusion of other things, especially at the beginning of your career. I think it’s also important to learn to love the process. The business side of things, even in the best of circumstances, is often challenging and frustrating.

A love of writing or filmmaking, while doing it, is essential. Outcome matters, of course, but if you love what you're doing, and learning along the way, that’s something the arts is uniquely qualified to give you.

A final word: write and do and create stuff that you are most passionate about. Do not try and chase the market. It’s a fool’s errand. Your best work will often come from a personal place.

Lastly, whatever you do: DON’T BE BORING!

The Importance Of Being Anxious, directed by Ralph Bogard, will be at the Museum of Comedy from 3rd to 5th August.