Carla Simón was born in a small Catalan village in 1986. Being part of an extensive family that is a bottomless pit of stories, she chose film to portray the complexity of the human condition and family relationships in particular.

She graduated in Audiovisual Communication in Barcelona after an exchange year at the University of California. She then enrolled in a MA TV Fiction course and directed the final pilot episode. Awarded with a la Caixa scholarship, she enrolled at the London Film School where she directed Born Positive and Lipstick, both screening at numerous international film festivals. Las Pequeñas Cosas (Those Little Things) is her graduation film for which she received a Distinction; it was developed at the European Short Pitch and funded by the Catalan Institute ICEC.

Carla is currently writing Summer 1993, her first feature film produced by Inicia Films, whilst also working as an assistant director and film teacher.

Ana (40) suffers achondroplasia - dwarfism - and her mother (70), a beautiful, elegant and sophisticated woman, has never accepted her daughter’s condition. The muted taboos between the two women resonate more than ever as they prepare the house for the visit of Juan, the son and brother who lives away from home and his new girlfriend.
Watch the film 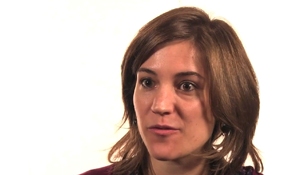