Read more about the previous participants of our First Film Summer School with Jonas Grimås. 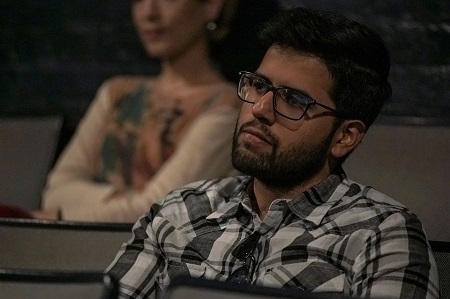 Reflections on the course:

"I started my filmmaking career with time lapses back in 2012. Once I started getting more ambitious, I ventured out into commercials. In 2018, I had a script for which I wanted to make a short film but for someone who never had a formal education, I felt that it would be a great idea to understand filmmaking end to end.

I absolutely enjoyed my three weeks at LFS as we had a wonderful tutor in Jonas Grimas. His depth of knowledge of filmmaking and script dissection made me feel like I had come to the right place. My brief time at LFS gave me a new sense of direction (pun intended), confidence and focus to start my short film. Armed with all the new knowledge, we finished shooting our short film SOUND OF TWO in 3 days.
What we didn't expect was the response this film got worldwide in over 25+ festivals and counting.The film won us best film awards in Italy, France, Sydney, UK, India, Romania and other countries across the globe.
I got the 'Best Director' award at Barcelona Planet Film Festival and at ARFF Paris. Even though the essence of this film may have been conceived before I attended LFS, it was my time at LFS which helped me take the leap. When I showed the film to Jonas, it was a proud moment for me to hear high praise from my mentor whom I highly respect."

Check out the trailer for Sachin's film, Sound of Two and his most recent short film A Love Letter From the Stars.