A detailed breakdown of the 3-week Directing Summer School with Udayan Prasad.

Let us imagine that we have to film the following scenario:

'A' drops a handkerchief and 'B' picks it up.

What is the story?

Do 'A' and 'B' know each other? What is the nature of their relationship? What do they want?

Why did 'A' drop the handkerchief? Was it accidental? Deliberate?

When did 'B' see the handkerchief? As it was dropped? Or after 'A' dropped it? Does 'B' return it? Keep it? Discard it?

What does the handkerchief signify?

Did 'A' and 'B' expect to see each other, or did they come upon each other by chance?

The point, of course, is that:

Everything begins and ends with the story.

Each participant will begin by shooting an exercise, impromptu, set in a single location in Covent Garden. The films will be edited and reviewed with a professional screenwriter, followed by a masterclass on script.

While taking part in acting workshops, each participant will then write a short script based on the ‘Dropped Handkerchief’ scenario. The scripts will be subject to rigorous constraints in locations, number of set-ups and camera movement.

The group will recce and prepare for their first shoots with a production manager, under the supervision of a director of photography tutor.

After a review each group will be provided with an editor and a private editing suite, taking it in turns to prepare their first cuts.

The twelve films will be reviewed as a group with a screenwriter, supervising editor and director of photography. Every decision made at each step of the production will be carefully scrutinised. Each participant will then revise their ‘Dropped Handkerchief’ script in the light of this experience.

At appropriate moments throughout the schedule, the group will also receive a series of illustrated seminars and masterclasses by professional filmmakers: 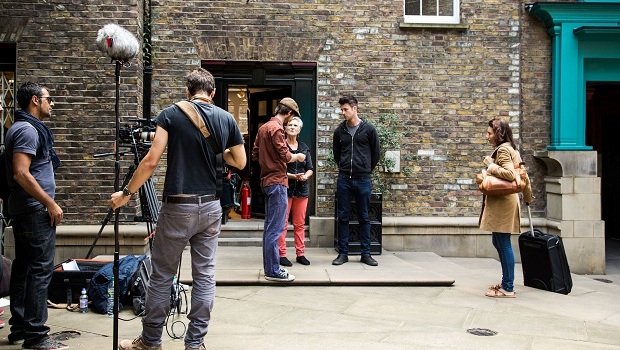 Week three is where everything gets drawn together. Each participant will re-shoot their handkerchief scene, this time with professional actors and sound recordists. Participants will be expected to apply all of the lessons learnt from the first two weeks to produce a piece of work which reflects their learning at LFS.

And finally...the course will culminate with a dedicated screening day where all twelve final films will be thoroughly reviewed, analysed and discussed. The participants will welcome back the team of professionals who have been advising throughout the course for their final thoughts and feedback.