How do you tell a story visually? What makes a film a film, and not TV? We could say a "real" movie is one that's mostly comprehensible with the sound turned off. But where do we start? In this 2-day workshop, director Josh Appignanesi takes participants shot by shot into the heart of cinema by introducing the following issues:

With inspiring film examples, practical storyboarding exercises, and analysis of participants' own films, this workshop will give you the tools you need. 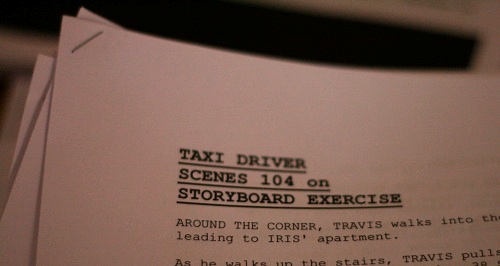 Though introductory in nature, the workshop would also benefit those with some prior filmmaking experience. Part of the workshop will be dedicated to analysing participants’ own work. Participants are therefore encouraged to bring along an example of their own work - preferably a short film in DVD format with a maximum running time of 10 minutes. Josh will address as many projects as he can within the allotted time.

(Please note: It is by no means compulsory to bring a film for Josh to analyse. It's merely an option for those who'd like to get some feedback.)

"The subject matter and the level was exactly as I'd hoped. Neither too technical nor too basic. I make ads and short films with no training and felt I needed to venture beyond instinct. I wanted an introduction to the vocabulary of directing, hoping to learn the basics of how composition, action, choice of angles, shots etc feeds into editing and storytelling, and the course delivered just what I wanted. Josh is a great teacher who kept us all engaged throughout. His depth of knowledge and understanding is worn lightly and shared keenly, and he enthused the class with his love of the subject. Great examples, insightful explanation, inspiring exercises and lots of energy. It was a diverse group but Josh included everyone and was sensitive to different people's needs. A great intro to the magic – and magic tricks – of telling stories with moving images."

Josh recently directed the feature FEMALE HUMAN ANIMAL, "a #MeToo thriller for female surrealists set in the real life art-world", which Little White Lies called "Unnerving, riveting and mesmerising" and The Observer called "A Triumph." It premiered at Sheffield Doc/Fest.

Josh also co-wrote romcom ALL ROADS LEAD TO ROME starring Sarah Jessica Parker, and has directed talent such as John Malkovich, Tom Hiddleston, David Tennant, Sarah Kestelman and Michelle Dockery, and collaborated with artist Martin Creed among others. He makes commercials at Independent.

THE INFIDEL:
“Appignanesi jumps, in one beautifully executed move, to join the front rank of new British directors. His timing is perfect, his feel for the rhythm of moral action is bracing.”
Andrew O’Hagan, THE EVENING STANDARD

“Startlingly, for this second project, Appignanesi shifts gear for something more confrontational and taboo-busting... a broad comedy that gleefully and repeatedly stamps on the tender toes of liberal correctness.”
Peter Bradshaw, THE GUARDIAN

SONG OF SONGS:
"A cinematic milestone… a challenging, unashamedly intellectual rigour to it. In both style and content, the film reveals a distinctive and bold new voice in British cinema."
Jason Solomons, THE OBSERVER

"A powerful and confident work and shows that Appignanesi is seriously committed to cultivating a real cinematic language."
Peter Bradshaw, THE GUARDIAN

You will be redirected to the LFS Payment Area where you can pay for your place simply and securely using a credit or debit card.