In 1994, Tim directed To Be A Somebody, the defining series of Jimmy McGovern’s CRACKER. It memorably portrayed the murder of DC Bilborough (Christopher Ecclestone) by Albie Kinsella (Robert Carlyle).  All Tim’s films feature atmospheric and economical storytelling; and their dramatic force comes from the quality and consistency of his actors’ performances.

Building on the success of his popular Director/Writer Collaboration: From Script to Screen workshop at LFS, Tim now offers two days of techniques for working with actors. 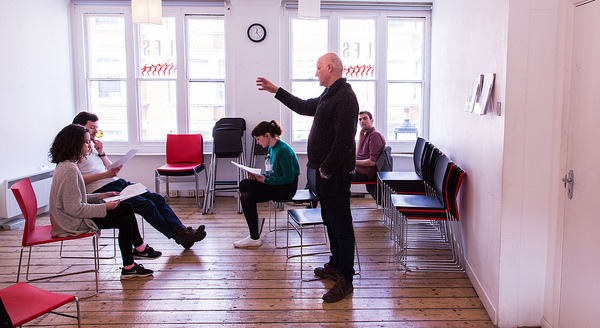 The aim is for a group of ten directors to experience Tim’s approaches to acting and directing first hand, through a series of practical script-based exercises.

Participants will alternately give and take direction; first working with each other, then with professional actors, who will join the group on day two.

Questions to be considered include:

The course will examine the director-actor relationship to the script, the character, and the shooting process. It will explore how the director can work with an actor to achieve a higher degree of characterisation and immediacy. It will also explore ways to re-set the approach if an actor is missing the notes, or is on a trajectory that does not reflect the tone or pace of the surrounding drama.

Other areas for discussion:

"A perfectly pitched opportunity to learn skills as a director that you might rarely be able to practice –without any consequences, at least. A good opportunity to meet other directors and to get a feel of the real working practices of a working director. Thanks Tim for a great learning experience." Myrna, participant March 2015

"In broadcast rehearsal, time is a luxury; you need to be able to get the performance you want from your actors in the twenty minutes it takes your crew to set up. Tim showed us how to work with a fast turnaround, how to allow the actors room to bring their own ideas, how to prep very quickly and resolve any issues with both script and performance." Farah, participant March 2015

Tim Fywell is one of the most accomplished directors of drama working in UK television today. The range of his work extends from GRANTCHESTER (2014, 2016 & 2017) to HAPPY VALLEY (2014); from MASTERS OF SEX (2013) to DRACULA (2014); from CRACKER (1994, To Be a Somebody, with Robert Carlyle) to MADAME BOVARY (2000, adapted by Heidi Thomas); from Sarah Waters’ AFFINITY (2008, adapted by Andrew Davies) to THE TURN OF THE SCREW (2009, adapted by Sandy Welch); plus SILENT WITNESS, WAKING THE DEAD, THE NO. 1 LADIES DETECTIVE AGENCY, DCI BANKS, LEWIS and WODEHOUSE IN EXILE (TV Movie, 2013). Tim's next project to air will be the forthcoming BBC1 drama series RIVER (2015), created and written by Abi Morgan, starring Stellan Skarsgård.

Tim's next project to air will be the forthcoming BBC1 drama series RIVER (2015), created and written by Abi Morgan, starring Stellan Skarsgrad. - See more at: http://lfs.org.uk/workshops/lfs-workshops/1577/directoractor-collaborati...

Tim’s feature credits include I CAPTURE THE CASTLE (2003) with Romola Garai, Bill Nighy, Rose Byrne and Tara Fitzgerald, and THE ICE PRINCESS (2005) with Michelle Trachtenberg, Joan Cusack and Kim Cattrall. Tim studied English at Cambridge University and began his professional career directing in fringe theatre before moving on to the West End.

Some of his theatrical credits include: LES LIAISONS DANGEREUSES (Playhouse Theatre); SKIRMISHES (Hampstead Theatre); RED SATURDAY (Royal Court); THE MOTHER COUNTRY (Riverside Studios); HITTINGTOWN (Bush Theatre); NO HAND SIGNALS (National Theatre), which he wrote and directed; I MADE IT MA TOP OF THE WORLD which he devised and directed at the Royal Court, and SPRING AWAKENING (Royal Court).

Booking instructions will appear on this page as soon as new dates are confirmed. In the meantime, please register your interest.