Duration: 3 weeks (2 days off during the course)
Times: Approx. 9.30am-5.30pm
Capacity: Max. 12 participants
Fee: £4,750  Fee is payable in two installments
Priority for this course will be given to applicants aged 23+ years. More info.

Based on an exercise originally devised by FAMU (the Czech National Film School) this 3-week workshop explores the fundamentals of filmmaking from script to screen.

Using an apparently straightforward event as its starting point – 'A' drops a handkerchief and 'B' picks it up – the workshop exposes, through a systematic and rigorous process of scrutiny, the complexities inherent in this, and indeed any scenario.

It goes on to examine the variations and possibilities which must be considered before the event can be translated first into a script, and then - via all the stages of prep, shoot and post production - onto the screen.

The primary areas covered are:

This is a highly practical programme aimed at anyone who is serious about a career in film; from those about to apply to a major film school, to anyone wishing to improve their understanding of the craft before embarking on their own short films. At the end of the course each participant will receive a certificate of attendance, plus a USB of their scenes which may be used for showreel purposes or as part of an application portfolio.

Directing Summer School with Udayan Prasad
Working with Actors: Getting the Right Performance

Udayan Prasad has been directing documentaries, television drama and feature films since graduating from the National Film & Television School in 1983. His feature films include Brothers In Trouble, 1995, My Son The Fanatic 1997, and The Yellow Handkerchief, 2008. His television credits include 102 Boulevard Haussman, 1991 and Talking Heads 2: Playing Sandwiches by Alan Bennett along with They Never Slept 1989, Running Late 1992 and Femme Fatale 1992 by Simon Gray. His TV series credits include Silent Witness 2010 for BBC TV, two episodes of The Tunnel 2013 for Sky Atlantic and the grand finale of The Musketeers 2016 for BBC TV. He was lead director and executive producer on the first series of Selection Day 2018 for Netflix.

When not actively involved in production, he is a frequent visiting lecturer on directing and screenwriting programmes at several film schools including London Film School and The National Film & Television School in the UK; The Wajda School in Warsaw, the National Film, Television and Theatre School in Łódź́́ and Gdynia Film School in Poland. He is also an advisor and mentor on various international directing and screenwriting workshops. 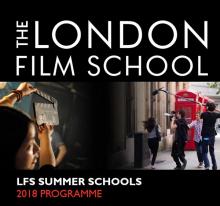 By registering to participate in this summer school you are agreeing to be bound by our LFS Workshops, Short Courses and Outreach Participants Privacy Policy.