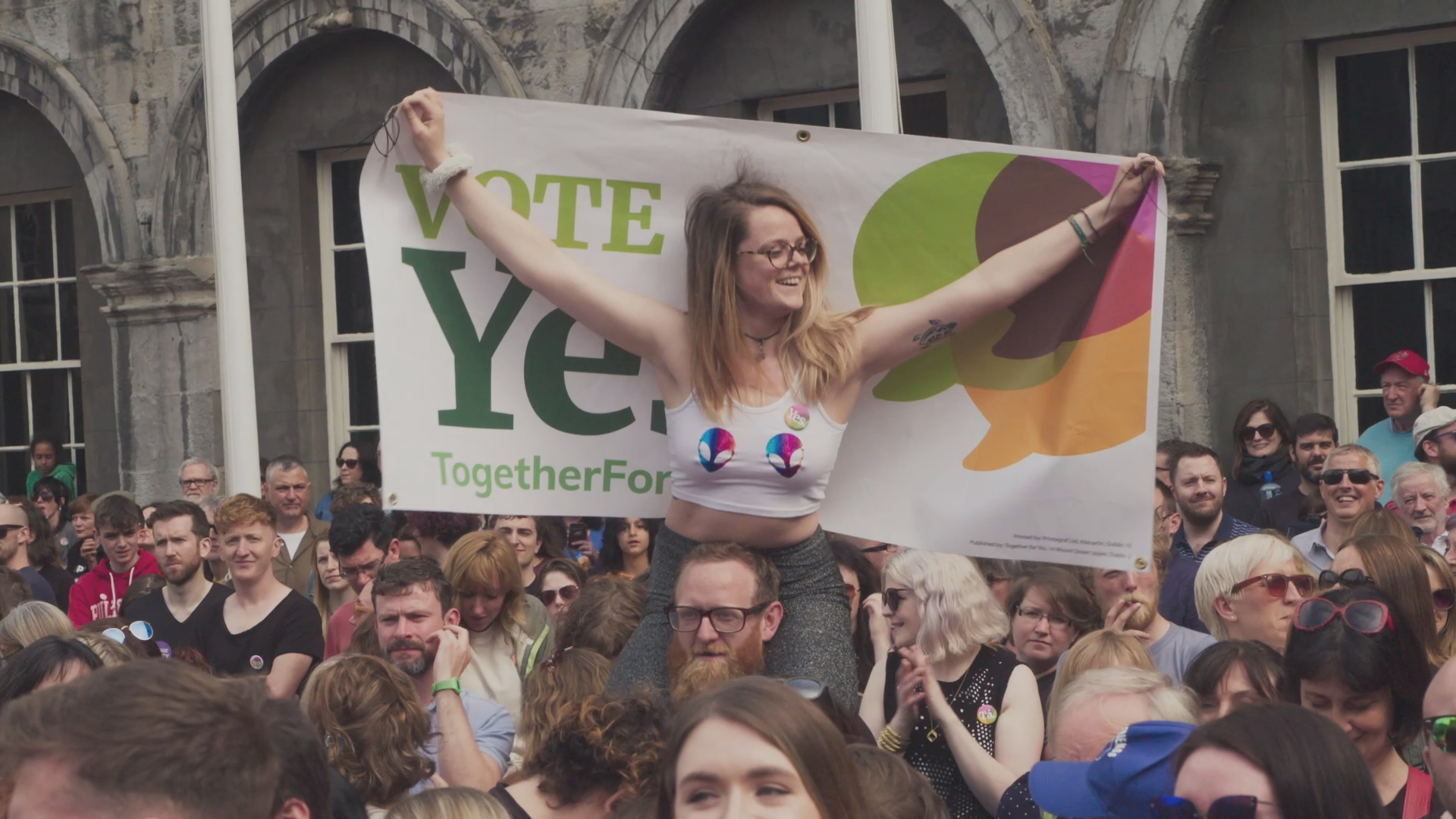 In 2018, Ireland made headlines around the world when it voted to overturn its longstanding abortion ban. Jubilant scenes of celebration went viral, but less visible were the 35 years of tireless organising and campaigning that led to that moment.

Shedding light on this longer struggle, The 8th (2020) is a documentary that bears witness to the social, cultural, and political moment that preceded the era-defining referendum result. The film focuses on two feminist activists: organiser Ailbhe Smyth, one of the leaders of the Irish pro-choice movement, and Andrea Horan, co-founder of the Tropical Popical nail bar and self-proclaimed “glitter activist”. In following these two women’s stories, the film acts as a toolkit for campaigners and activists working towards similar struggles around the world, demonstrating how art, culture, empathy, and compassion can be utilised in the long battle for equal rights.

Interested in creating something similar? Explore our filmmaking and screenwriting master’s programmes.

We spoke with Maeve O’Boyle who, along with Aideen Kane and Lucy Kennedy, co-directed The 8th. An Emmy award-winning editor and producer, O’Boyle also co-edited and co-produced the documentary. She shared her insights on filmmaking, how to capture a political struggle in real-time, and the editorial decisions that made The 8th such a powerful documentary. Rosa Abbott: How did The 8th first come together — and how did you realise that a political moment was about to happen?

Maeve O’Boyle: I had always wanted to make a film documenting a woman’s journey to the UK [for an abortion]. Not something so political, a more point-of-view film — you’d see a woman travelling over, going through the whole procedure, and coming back. Aideen Kane, my co-director, had her own experience of the issue and wanted to document it, too. When we met Lucy Kennedy it naturally came together. We felt we would be a really good trio: Lucy is an investigative journalist, I’m a longform story editor, and Aideen is a producer and storyteller.

When we initially came together in 2016, we were all living in New York and watching from the sidelines. Savita Halappanavar had tragically died in 2012 and we’d been watching everything unfold over the course of those four years. We knew something was going to happen in Ireland — we didn’t know what but, chances were, there would be a referendum. So, like many documentaries, you get that feeling it’s about to ramp up, that it’s going to escalate into something massive, and that’s exactly what happened.

We did a year of proper research, then were on-the-ground filming from 2017.

How did the three of you map out your approach as collaborators?

We planned a lot before we shot. The three of us went away on holiday together, and we were constantly brainstorming over the course of about four days. That was a really good idea — we came up with an arc and a plan and a narrative way to tell the story. Having done that, we were on the same page, so it was easier to put together. The two main protagonists — Ailbhe Smyth and Andrea Horan — were fascinating as they represent two very different styles of activism and engagement. How did you choose these two women and how did you build up a relationship of trust with them?

In our year of research, we’d gone to many meetings, campaigns and protests. We could see that Ailbhe Smyth was central to the issue. She’d been fighting this her whole life — the stakes were so high for her, and because she was in her 70s, she had this vantage point. We felt that she would be an incredible woman to guide us through. With Andrea Horan, we wanted to document a more unorthodox approach to activism. She was running a nail bar and she was interested in the role of arts and culture in activism. She was engaging a younger group of women directly affected by this issue and who were motivated and mobilised through the nail bar and through conversations with everybody around them.

So, it was a very grassroots approach; we thought it would be a great counterpoint for the more formal campaign. We wanted to make a vérité-style film, following these two women as they journeyed through this massive issue. We wanted them to tell the story, and we knew that they would be strong enough protagonists to carry us through.

You also spoke to some of the opponents of the pro-choice campaign, like Wendy Grace from Spirit Radio. Did you feel a duty to be impartial when approaching this issue, even though it’s such a divisive one?

The three of us were always coming at it from a pro-choice perspective, but we had long conversations about how to document the other side, the anti-choice side. We felt that we needed to hear their voices, it didn’t seem right to tell the story without understanding where they, too, were coming from. We approached both sides pretty much at the same time.

We were really interested in Wendy Grace because she’s a younger woman who, again, would be directly affected by the legislation and who had many very interesting feminist ideas herself — and yet she was fervently anti-choice. We felt it was an interesting perspective to add to the film, giving it more depth and nuance.

Some of the scenes show anti-choice protesters and the very visceral imagery that they used. Was it emotionally taxing to navigate through that footage? As filmmakers, how did you protect yourselves from the strong emotional forces that were running high during that campaign?

It’s a great question and I know it sounds almost a little cold, but with my background as an editor I’m always very conscious of narrative and how it needs to be structured. It’s almost technical on some level even though, of course, it’s emotional. You need to balance things out, from a narrative perspective, with the other voices. It’s a question of driving the narrative and allowing the narrative to drive itself. You need layers in order to make a full story. This issue is so polarised, very black and white, so we tried to blend in those other colours and try to see it from a more nuanced perspective.

Towards the end, there’s some audio recordings of women telling their stories of abortion, and it’s layered in a very cacophonous way, without visually representing the women. Could you talk us through that scene?

We call those voices the “chorus of voices”. That was one of the first ideas we had — to represent the women who had travelled [to get an abortion] — so we started interviewing women really early on. We gathered stories from women from all over the country who had incredibly different experiences and in all different kinds of scenarios.

To me, it felt like one of the most humbling parts of the project. You heard some of the horrendous things that had happened to women who had travelled, and you felt that you were at the coal face of the situation when you spoke to women directly. It was absolutely crucial to get that into the film. It was as if, as Ailbhe says in the film, Pandora’s box was opened. As the issue was discussed, as it became more vocalised, there was a kind of destigmatisation. So for us it was, in a way, the climax of the film, the most important part, and we were incredibly grateful for all of the women who participated.

What’s the relationship between filmmaking and activism for you — do you see yourselves as activists at this point?

We certainly didn’t go into making the film as activists — we wanted to make a historical document. But I think we all felt strongly pro-choice and, when you research an issue and you dig right into it, you can’t help but awaken your activist soul! I felt incensed by a lot of things that I didn’t know or fully understand before I started the project.

So, I’d say a little bit, but we’re first and foremost filmmakers who are trying to make a good film and document an issue.

I was in Dublin at the time as well and it was such an energising moment. You couldn’t come out of that campaign not feeling more politicised!

Yes, and it was such an incredible campaign. One of the most amazing things was the youth movement — the huge push by predominantly young women and men out on the streets all over Ireland. It was incredibly well-organised and I loved the fact that there was so much political art around it. People were making jewellery, murals, music. Everybody was engaged. How do you hope the film will be received by other political groups with similar struggles? Is this a film that can be used and learned from in an international context?

We’ve been told by various activists in other countries that this is a film people can learn from — if nothing else, just the fact that it can take 35 years to get something over the line, but Ireland did manage to get this over the line. A lot of our funders came from the US (Open Society Foundations; Ford Foundation) and we’ve had meetings with many incredible activists and advocates in the US who’ve found the film to be inspiring.

We’ve shown it in Poland and we are showing it there again at Docs Against Gravity in September. In Poland [where there is a near-total abortion ban] this really matters at the moment, so it’s great that it’s playing there.

What’s next for you?

What advice do you have for film students or aspiring filmmakers?

Always have a core idea that is your guiding principle to telling the story. It should be very, very simple — it should really be one line. Hold on to that idea, keep reminding yourself what you’re trying to get across, and stay focused on it.

The 8th can be screened online via Curzon or BFI Player.