As we know it takes time, tenacity and talent to develop a career as a screenwriter. Since the MA Screenwriting programme launched in 2005, many graduates are now working professionally across the industry in development, production and on their own projects in companies as diverse as Matador, Scottfree, Lionsgate, Power to the Pixel and Focus Features.

Charlotte Colbert for example has had an outstanding few years since graduating. Now represented by Casarotto Ramsay she has written an array of feature scripts, including a commission by Pippa Cross focusing on the issue of underage asylum seekers in the UK, which was directed by BAFTA-winning director Bruce Goodison, and stars Toby Jones. It played in this year’s BFI London Film Festival. Her grad screenplay meanwhile, mentored by Laurence Coriat, a fictionalised biopic around the character of Lou Andreas Salome has now been picked up by Dorje Films and Les Films du Poisson to be made as a French/German co-production next year. Other work includes Project Eve a collaborative feature script with eight female writers led by actress Ruth Wilson, as well as a teen-adventure adaptation with Tony Grisoni. She was also part of Skillset’s SOS scheme for which she wrote an original feature script Cab Ride Home, a mumblecore film set in 1960s LA, currently optioned by The Bureau. In the course of last year, she teamed up with Parkville Pictures and Charlie Fink (frontman of band Noah & The Whale) to write a 30-minute futuristic fiction, which was financed by Universal and is currently touring with the band. Recently she has been commissioned by Vito Films in Paris to write an original feature script for director Olivier Dahan (La Vie En Rose; Grace of Monaco) and is also working on a comedy with award-winning director Harry Wootliff, which is being produced by the BFI and Fly Films.

In the past year other significant graduate achievements include Robyn Pete’s collaboration with MAF graduate Jamie Chambers on his first feature Blackbird, which was premiered  at EIFF and where it was also nominated for the MICHAEL POWELL AWARD and won BEST OF THE FEST, it was also nominated for the AUDIENCE AWARD at the Scottish BAFTA's. Chris Andrews has also benefitted from support from EIFF with his feature project Scuttler – mentored by Kate Leys and Ivan Mackinnon through the EIFF network currently seeking development finance.

Luke Foster’s first feature credit Betsy and Leonard was also a collaboration with a MAF directing graduate Bernhard Pucher and won Best Original Screenplay at the Madrid International Festival and Best Film at the Tenerife International Film Festival. Icelandic graduate Hrafnkell Stefánsson is in post on his third feature City State with an earlier screenplay picked up by James Mangold (Walk the Line, Girl Interupted). Adam Dewar’s short thriller Hardwire was selected as part of the Collabor8te scheme run by the Bureau, Dazed and Rankin Film Productions. Directed by Rankin himself and starring Marc Warren, Toby Jones and Laura Haddock, it will be premiered on Sky Arts in the New Year. Adam is now developing a three-part political drama for Rankin Productions and an American Football set crime drama for the Bureau.

Kefi Chadwick, who is already a successful playwright, has just finished filming her short Girl Power - a collaboration with MAF graduate Benjamin Bee, starring Jason Flemying, Alice Lowe and Dakota Blue Richards. She also has commissions from New York based production company Melenchuck Williams, and a TV drama project in development with Noho Film and TV. Other collaborations with MA filmmaking graduates include James Rzicka’s work with Anu Menon on a feature screenplay Romesh and Jugal, a gay Indian Romeo and Juliet comedy, which they sold to Bhalaji Motion Pictures, while MAS graduate and writer/director Priyamvada Narayanan recently won Best Foreign Short at the Californian International Film Festival with her film The Breadfruit Tree and Rachel Smith took first place in the Rhode Island Screenplay competition with her grad script - a romantic comedy titled Fix You Up. Vidur Nauriyal from the same cohort has been collaborating with the young Indian filmmaker Ashim Ahluwalia, whose last film Miss Lovely was screened in the Un Certain Regard section at Cannes last year.

Screenwriting labs and workshops are increasingly a way for a writer to get their work read and developed as well as to meet with producers but they are often fiercely competitive. This year Kaveh Mohebbi was selected on the basis of his LFS grad script for a scholarship place at the Canadian Film Centre – a six-month workshop with five places out of three thousand applicants. Participants are guaranteed writing jobs in the industry at the end of the programme. From the same year, Despina Ladi was one of twelve writers selected for AdaptLab, TorinoFilmLab's advance training course on adaptation, consisting of three residential workshops and two online sessions. In the final workshop during the TorinoFilmLab Meeting Event in November in Turin, she presented her project to international producers, sales agents and other industry professionals from all over the world.

Ben Clearly meanwhile followed on his success last year in winning the Blue Cat screenplay award in Los Angeles with a commission from RTE, Ireland’s national broadcaster to write seven episodes of a children’s TV series. On the production side Ines Braga is a key member of the development team at multi-platform company Power To the Pixel while MAS grad Lucia Lopez was recently appointed as Head of Development at Matador.

Projects appearing in a cinema near you also include Vahid Hakimsadeh’s first feature as a writer-director Greater Things, shot on Super 16mm in the UK, Japan and Switzerland. The cinematographer was Camera d’Or nominated Ghasem Ebrahimian and the cast includes cult Japanese jazz musician Toshinori Kondo and actress-turned-director Kaori Momoi, a 5-time Japanese academy award winner, and veteran of Kurosawa and Imamura. 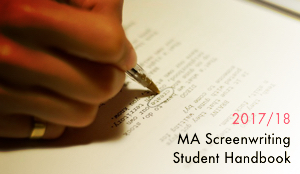