The following are some of the teaching staff for the MA course. In addition to this list and alongside the staff across all areas of study, our full-time staff, a wide range of visiting lecturers, guest speakers and panellists visit us regularly.

Roger is on his third career. Having worked as an actor for twelve years with some of the UK's most prestigious theatre companies (including the RSC and The Traverse), he moved into television drama development at the BBC. There he worked with Tessa Ross developing series, serials and features such as Patrick Keiller's ROBINSON IN SPACE and the Amber Collective's THE SCAR.

He left the BBC to become Head of Drama Development at TalkBack Productions and then made the shift to writing his own work. He is currently working on a feature screenplay and a novel. He has written the original book and lyrics for a musical, CARNIVAL OF THE ANIMALS, which will open at the Riverside Studios in July 2013. He is about to complete the follow-up to his short film SUNDAY. SUNDAY, featuring a voice-over by Bill Nighy, was screened for an extended run at the Renoir Cinema in London and was selected for the 2010 London Short Film Festival. In 2012 he was script editor for KELLY + VICTOR.

Roger continues to work as a freelance script consultant and is a visiting tutor at the London Film School's MA Screenwriting and MA Filmmaking programmes.

Amit started composing at the age of 12 and his first composition was performed at the Camden Festival when he was 14. Since then, over a twenty five year career in music, Amit has composed, orchestrated and acted as music director on a broad range of projects which includes, 2 CDs with Carmel (Warner Bros), Diehard director John McTiernan, The 2nd Bakery Attack director Wolf Baschung (featured short film Sundance Festival), Greekfire (series broadcast on C4), Our Orchestra (broadcasts on WMBR Radio Boston USA), Andorra by Max Frisch directed by Michael Attenborough (Falmer Arts Centre).

Amit studied film scoring with Jerry Goldsmith, John Williams and David Raksin in the USA. Amit was the Head of Jazz Composition and Arranging at the Royal Academy of Music and has published articles on film music.

After graduating in Film and Video, Angelina trained as an off-line editing assistant, working on drama and documentary projects. Approached by Poppy Films she became assistant to Peter Goddard, assisting on many of director Tony Kaye's commercial work. Eventually, herself becoming an editor, Angelina gained extensive experience in commercials and post production supervision for advertising agencies such as AMV BBDO, Grey London and Leo Burnett working on high profile brands such as Coca Cola, Adidas, Orange and Ford Motors. She has also edited music videos and short films and assisted on several features, including AMERICAN HISTORY X directed by Tony Kaye and IN LOVE AND WAR, directed by Richard Attenborough.

As an editor on film, Angelina has co-edited CARIB'S LEAP/WESTERN DEEP for Steve McQueen and HAND ON THE SHOULDER, screened as part of Channel 4's censored series. She is on the board of governors for the Guild of British Film and TV Editors and contributes regularly to its First Frame magazine.

Before joining the London Film School Karen was a freelance Sound Editor working on feature films, TV dramas and documentaries in South Africa and the UK. Member of the Association of Motion Picture Sound AMPS.

After a degree in Economics and a spell as an advertising copywriter Les Blair enrolled as a student at the London Film School. In 1969 he spent six months in Prague as an exchange student at FAMU where he made a short documentary about life under the Soviet bloc invasion which was shown by the BBC before being snatched back by the Czech authorities. On returning to London he produced and edited Mike Leigh’s first film Bleak Moments before launching his own career as a director with a string of films made for television which he wrote and directed after extended improvised rehearsal with the actors. He also directed the work of other writers, most notoriously G.F.Newman’s Law and Order which secured a place in television history with its portrayal of endemic corruption in the police and judicial system. His TV films News Hounds and The Accountant both won BAFTA’s for Best Single Drama. He has written and directed feature films for cinema including Bad Behaviour which won the Evening Standard Peter Sellers award for comedy. His work for the theatre includes Becket’s Waiting for Godot and two plays of his own.

Peter Hollywood is an award-winning editor, who has been editing for over twenty years. As well as collaborating with well-known directors, such as Ridley Scott, Mike Newell and Terry Gilliam, he has been contributing to almost every genre imaginable, ranging from no-budget shorts and independent documentaries to network television and multi-million dollar features.

Writer-director, born in London to Anglo-Polish parents. After studying literature then film at University of Kent at Canterbury, became Visiting Research Scholar in Film at University of California at Berkeley before returning to the UK to work in the independent film sector and higher education. Short films including Alfalfa and Flames of Passion were distributed internationally. Work as a director for British TV received Royal Television Society and D&AD (Gold and Best of Year) awards and a Prix Italia nomination. Feature-films Love and Death on Long Island (John Hurt and Jason Priestley), and Owning Mahowny (Philip Seymour Hoffman and Minnie Driver) both made Best of Year critics’ lists. Awards include prizes from Cannes Film Festival, Berlin Film Festival, New York Film Critics Circle, US National Board of Review, and BAFTA. He teaches directing, screenwriting and acting-to-camera at a range of institutions in the UK and beyond, and has contributed to many European initiatives in feature film development. His LFS directing workshop for film students and actors has just celebrated its 300th edition. His name is easier to pronounce than it looks: Kfee-etnee- ov-skee.

Terry is a member of the International Cinematographers Guild and began shooting 16mm documentaries in New York in the late 1970s. His work appeared on America's PBS, Britain's BBC and Channel 4. The trend toward incorporating dramatic recreations into documentaries provided Terry with a means of linking his love of documentaries with lighting for drama. This led to his work as Camera Operator and 2nd unit DP on 35mm feature films.
Three programmes or series Terry has filmed have won Emmy Awards and two have been nominated for Academy Awards (Oscars). His last project before turning to full-time teaching was a documentary on The Rolling Stones directed by Michael Apted, a two-camera shoot on which he worked with Seamus McGarvey ASC, BSC.

Studied Electrical Engineering, after graduating worked for a number of years as a service engineer and industrial product designer. Sound recordist on a number of factual, educational and documentary strands for BBC and Channel 4 such as Inside Tracks, On the Record, Panorama, Breaking the Fear (independent feature) and shorts You're In There Ltd. and Konfident. 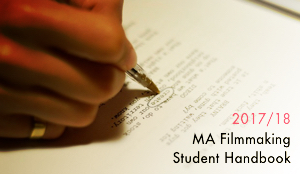