You only have to look at the fact that films by nine former Berlinale Talents are on the shortlist for this year’s Oscars to understand what a bell-weather for future success this programme is – and this year London Film School has no fewer than five alumni taking part, one of them for the second time.

Jacqueline Lentzou, Lorenzo Nera, Zhannat Alshanova, Joshua Magor and Lara Zeidan have all been selected for the Berlin International Film Festival’s talent development programme, which each year invites 250 outstanding creatives from the fields of film and drama series from all over the world to take part in an extensive summit programme of master classes and panel discussions with top industry experts. Participants also benefit from the Berlinale’s range of Project Labs, where they can further develop and present their own projects.

Each year over 3000 filmmakers from approximately 130 countries apply to the programme – 3401 this year, to be precise, with a highest-ever percentage of female applicants at 44%. An international committee then selects the 250 talents - not always recent graduates, but people who tend to be in the first ten years of their career – with the aim of supporting them in positioning themselves in the filmmaking industry.

Talents have the opportunity to meet experts, experienced professionals and well-known filmmakers and to present their projects to the festival public. Berlinale Talents also provides studio programmes and workshops for specific groups of film professionals, with the event closely linked to the Berlin Film Festival’s programme sections, as well as the European Film Market.

Participants include everyone from directors, producers, screenwriters, editors, sound designers, composers and actors to distributors, sales agents, journalists and film critics, which means Talents alumni are submerged in an extremely wide pool of industry peers with whom to network and connect. 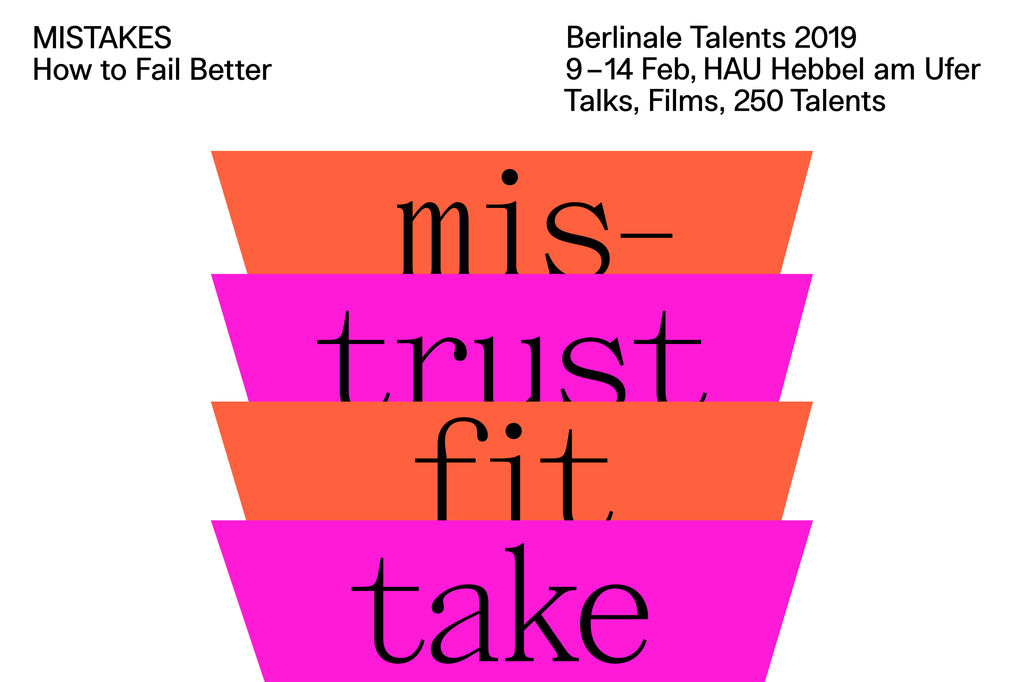 This year’s 17th edition of Berlinale Talents takes place from 9th to 14th February at the three HAU Hebbel am Ufer theatres, where for the first time Berlinale Talents is “promoting open dialogue and a change of perspective with a new interior design and seating arrangement — one that breaks with the hierarchies between stage and auditorium.”

The 2019 programme will be organised around the theme of Mistakes. “The aim is not only to talk about how to deal productively with minor mistakes and major catastrophes, but also to focus on the deliberate decision to “do things wrong” as an aesthetic experiment, a creative force of renewal, and a willful rebellion of art against the norm. As programme manager Florian Weghorn puts it, “We all make mistakes. It’s time for us to take a deep breath, be honest with each other, and question the reasons and who has the right to judge. Let’s openly debate what’s ‘right’ and what is supposedly ‘wrong’.”

Accommodation and travel are provided, and participants are also invited to attend the 69th Berlin International Film Festival from February 9th-17th. As well as being Oscar-shortlisted, former Talents have swept the summer festivals this year, with the Golden Leopard at Locarno, the Special Jury Prize at Venice and the Toronto Platform Prize all being won by Talents alumni.

We wish our fab five Talents a fantastic time at this game-changing event, and congratulate them all on being a part of such esteemed filmmaking company!

Click here to read more about their journeys from London Film School to Berlinale Talents.

Applications for next year’s Talents open in July 2019. For more information, see https://www.berlinale-talents.de/channel/how-to-apply.html