Jan wrote many bad novels as a teenager, turning to screenplays later whilst studying for a philosophy degree.

He has worked as a tai chi instructor, a mobile DJ, an ice hockey referee, a baguette slicer and a receptionist before learning how to shoot his screenplays whilst making DIY genre pictures with friends in Walsall and working as a builder for several years. In 2009, he moved to London to pursue filmmaking full-time.

Over the last few years Jan has been focusing heavily on improvisation, capturing spontaneous performances and telling the kind of stories you overhear on public transport.

A mid-twenties couple spend their first night together in a hotel. However, things aren't as simple as they appear; she's married. Things get more complex when, that same night, a test shows she's already pregnant by her husband. Trapped in the hotel together, the pair are forced to recontextualise what this means for their budding relationship.
Watch the film 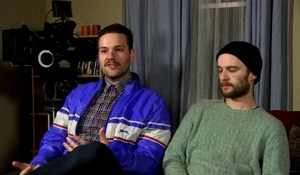