Rewriting the myth: Caroline Catz on bringing the Delia Derbyshire story to life 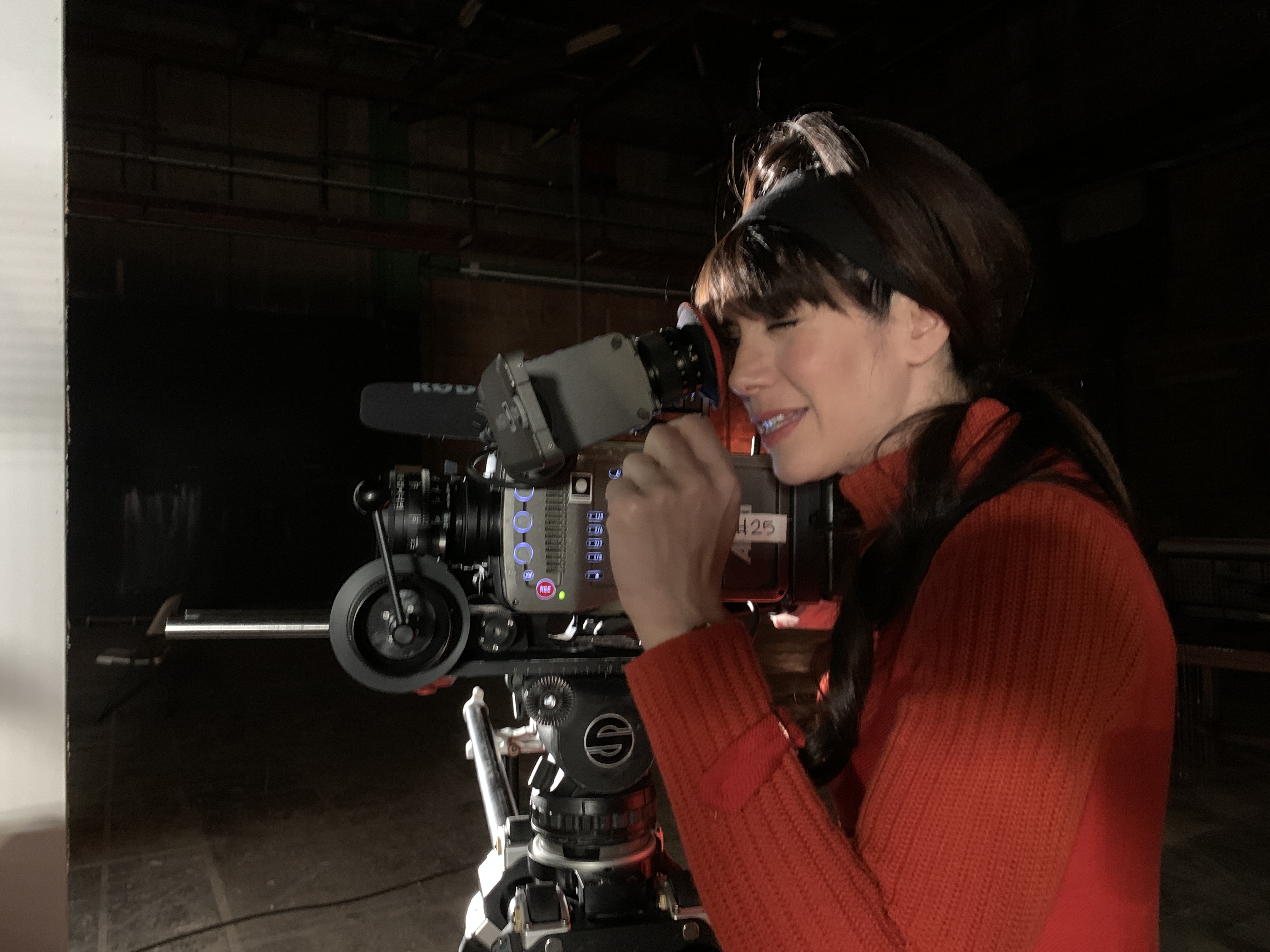 Screening at the BFI London Film Festival from 15 – 18 October 2020, Delia Derbyshire: The Myths and The Legendary Tapes paints a lyrical, colourful portrait of one of electronic music’s unsung early pioneers. Uncredited and underappreciated in her time, Delia Derbyshire was part of BBC’s Radiophonic Workshop from 1961–1973 and used magnetic tape to manipulate ordinary sounds into enchanting sonic landscapes that still sound futuristic. Her most well-known composition is the original Doctor Who theme tune, reportedly inspired by air raid sirens she heard as a child growing up in Coventry at the outbreak of the Second World War.

Writing, directing and starring as Delia Derbyshire in the film is actor and director Caroline Catz. Blurring the line between documentary and biopic, the film draws upon an extensive archive of tapes and documents found in the wake of Derbyshire’s death in 2001. We spoke to Catz about what it was like to delve deeper into the Delia Derbyshire story, and how archival material, sound and cinematography have been used to bring it to life.

When did you first discover the work of Delia Derbyshire and what sparked your interest to dig deeper?

I’d always been fascinated by the Doctor Who theme tune – it had this otherworldly quality that sent us all ducking behind the backs of our sofas when we were kids. I always used to feel that the TV show was quite disappointing in terms of its horror value compared to the theme, it had such a massive impact on me! It wasn’t until much later that I discovered that Delia had realised the Doctor Who theme tune. Her name was never on the credits and her work at that point wasn’t well-known.

It wasn’t until the late 90s, when some of her other tracks were released, that a slight cult started to appear around her.

In 2007, a few years after Delia died, her archive – 267 unheard tapes from when she cleared her desk at the BBC – was donated to the Screen Studies Department at Manchester University. As soon as I knew they had them, I went. I just wanted to know more. There was a cupboard with these old Kellogg’s cereal boxes full of her things, full of her papers and her life. Listening to the tracks, I felt like I might get to know her in some way. Hearing her voice and these amazing, complex sound worlds being built, I just felt suddenly like she was very there and very present. It’s an amazing resource of unfiltered material: a life’s work. I thought, how many stories get lost like this? That made me feel very strongly about wanting to make a film about her.

What did you find in the archive that resonated with you?

Listening to her voice, listening to her laughing in between the tracks. Suddenly I felt like I was in the studio with her. Of the tracks themselves, there were so many that affected me. Her drawings and papers are beautiful as well. My research grew with the archive expanding. In 2011, there was another discovery in her childhood home in Coventry. The new owners were doing some renovations and found this amazing resource of Delia’s childhood schoolbooks, school reports, trinkets, things she’d kept… a little private world of Delia that was hidden in that house. I was interested in the idea of engaging with the archive as a performer.

Delia was a very unconventional figure, with a maverick approach to her creations – did that push you to take a more experimental approach to telling her story?

Definitely. I was fascinated by the processes she used – the idea of musique concrète. In musique concrète, raw materials are manipulated to become something else, yet the product created still bears the traces of its earlier form. It was the amazing genius of her that pushed my thinking into certain directions, particularly in how the structure of the film was going to be revealed. My general rule was to be inspired by the process and not be afraid of where it took me, and it did take me to some very strange places – it’s an unusual film. 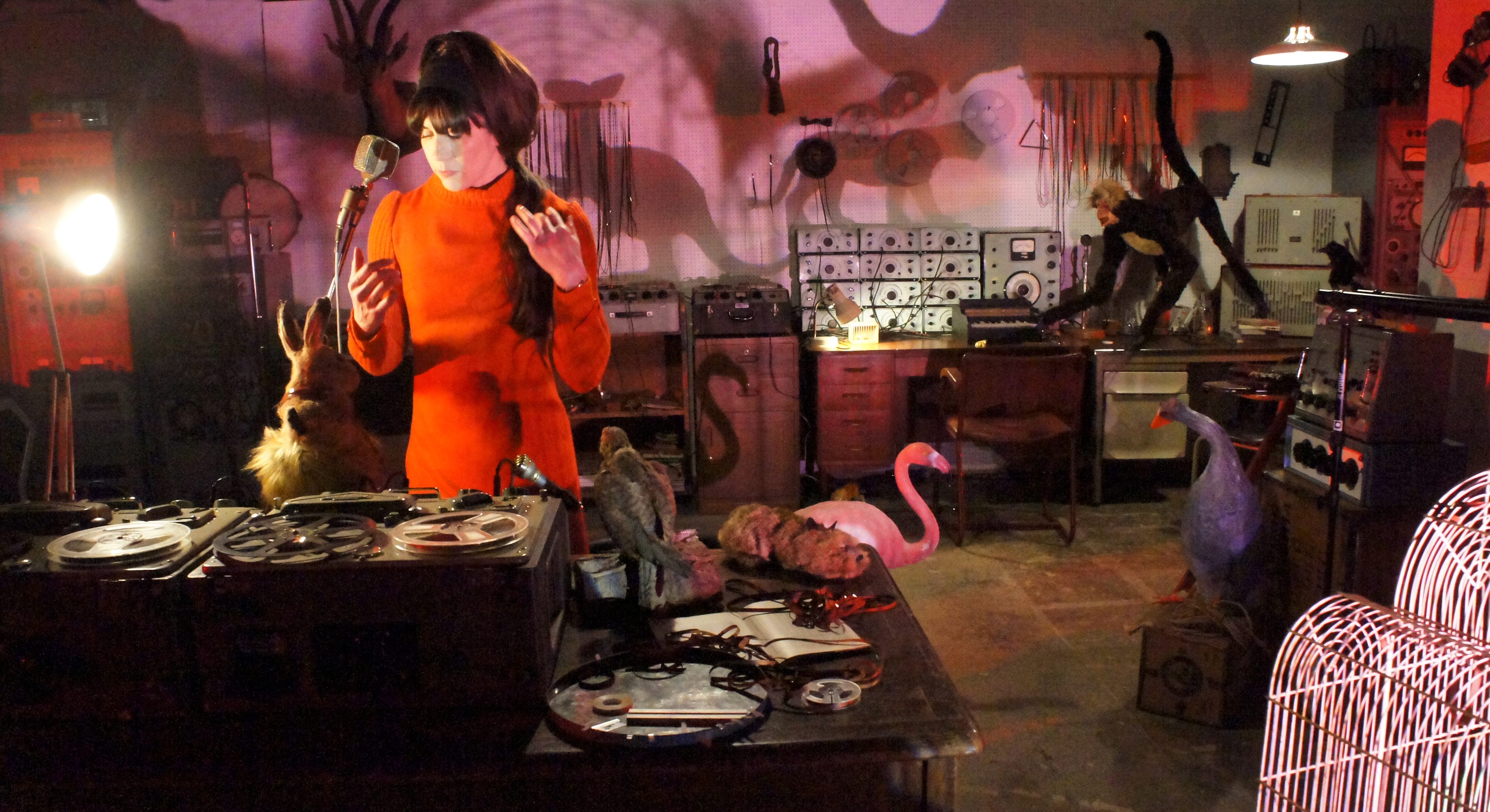 The soundtrack is by Cosey Fanni Tutti who, much like Delia, is a radical and boundary-pushing electronic musician. What inspired you to invite Cosey to collaborate and what was that process like?

When I went to the archive and listened to Delia’s music, a lot of thoughts, responses and ideas came flooding in. It occurred to me that it would make sense to have a musician’s response. One option was to use Delia’s work throughout the film: we had amazing access to her sound pieces, generously given to us by the Delia Derbyshire Estate. But the other idea was to think about the legacy of Delia and her influence, to have a composer create a score inspired by her using manipulations of her sounds.

Cosey is very groundbreaking, she has a different process to Delia, but it feels like they share a pioneering spirit. I liked the idea of them redrawing rules, of not being afraid to go into territory that hadn’t been tackled before. It became an amazing collaboration, her involvement in the film grew and grew. Her quest for understanding Delia through creating the score was as important as mine. I wanted to join the two stories.

The film’s cinematography is very evocative, almost psychedelic at times. Did you feel that was something important – to add colour to her story – and how did you work with your Director of Photography to produce that effect?

The DOP, Nick Gillespie, is an amazing person to work with and has a very maverick approach with everything he does. He has this amazing capacity to see things very macro, close up, intense and claustrophobic, and also hugely expansive. We talked a lot about the cave-like environment of the studio, which is very theatrical. But we also wanted to bring in interviews, and to get out into Cumbria and blend in some archive footage from her time there, after she left the BBC. So, there were many different tones, but we wanted to make it feel like we were in the same film. The conversation I was having with Nick was, how are we going to do that? Colour was a thing we talked about a lot.

When we did the archive interviews, we talked about how to create a kind of romantic veil over that very harsh, digital, definite thing that you get in documentaries – to somehow muddy that, so that we were looking through a lens of memory. The whole point of this story, I think, is that there is no one truth to anyone’s story, whoever they are. People’s memories are sometimes more reliable than other memories. Some interviews stacked up and everyone had the same story; sometimes they varied massively. There’s no one truth about anybody, and I wanted to make that point. This isn’t a linear biopic, we’re not saying that this is the truth of Delia’s life, this is yet another myth. She will always, eternally, be a mystery.

We were shooting on an Alexa Mini, and the lenses we had were Japanese Holga lenses that have a very 70s look - they’re quite low-grade and brought in a lot of refraction of light, lots of flares. That flaring was something we brought into the studio scenes too. We also shot on Super-8, iPhones and an FS7 as a second camera. So, we had a great big mix of stuff and we tried to go for this particular, mythological feel. That was something I worked very closely with Nick to produce.

Late in the film, Delia’s character asks, “Who designs the myths?”. Were you conscious of having responsibility, as an actor and as a filmmaker, in representing her story?

It was on my mind the whole time. What gives me permission to tell this story? The answer is nothing. Your interest and your curiosity are valid reasons, but then, first, it was important to have the permission of Delia’s estate. I also wanted the things you saw on screen to be backed up in some way, whether it’s by a memory of something happening, a piece of music, or Delia herself saying how she felt or what she saw at the time. The evidence was our starting point, then jumping off from that we had to allow license for imagination. You can have this unfiltered, raw archive, but the act of engaging with it ultimately requires some level of dramatisation. Whenever you’re engaging with anything historical, there has to be human empathy where you’re fleshing out the facts. So, I was exploring that idea as well: what is real, and what is our imagination? In between is where the myths happen.

This is your first feature-length film as a director. What did you learn in the process of making it? Do you have some practical advice you’d be willing to share, particularly with the students at London Film School?

I think the most important thing is probably preparation. Going through the script word by word, line by line, making sure there are no question marks. Then communication and collaboration with your departments: making sure everybody knows what’s happening all the time. I had an amazing experience working with Andy Starke, who’s a brilliant producer. We knew we had a small budget, and a limited amount of time, so we had to use our time well. I also worked with an amazing production designer, Felicity Hickson. We started working together very early on, and this prep period was vital to the shoot. There wasn’t anything that was in my mind that wasn’t also in Felicity’s mind. So, communication and shared vision are my biggest things, and that’s what I’ll be bringing into my next project.

Images: Header is Caroline Catz on set, photo by Nick Gillespie / 2 x stills from Delia Derbyshire, The Myths and the Legendary Tapes.

Delia Derbyshire: The Myths & The Legendary Tapes is screening as part of BFI London Film Festival from Thursday 15 – Sunday 18 October.

London Film School is one of the world's key graduate film schools and retains the position of film education's most cosmopolitan institution. Our graduates are established filmmakers in more than eighty countries. Find out more about London Film School’s MA courses in Filmmaking, Screenwriting, and International Film Business.